Here's an interview you can listen to if you like. It says it all.
soundcloud.com/paulvlhunt/raewyncaisley

I was born in South Auckland. My English mother wanted my sisters and I to ‘speak like the Queen’. A little unhelpful given that South Auckland was a largely Maori population.

I grew up admiring Maori culture. Their focus on whanau (extended family) and their connection to the land impressed me deeply. The NZ bush is still the place where I feel most at peace, and never alone.

I also grew up loving the beach and a feed of kai moana (seafood) with a nice, cold Lemon and Paeroa or when I was older, a Steinlager. This came from my dad who loved fishing and boats. He was an educator who believed in equality of opportunity. Another strong influence...

I moved to Australia with my husband in the early 80s. Now I was the migrant daughter of a migrant!
Living first at the glorious beaches of Cronulla I of course wrote about a girl who wanted to be a mermaid - an early career path that still has appeal. When we moved to Melbourne I wrote what I needed to in order to get published (we’ve all done that!) and then when we had a year in Brisbane I wrote a story about packing boxes turning into castles.

I’ve lived in Australia for three decades now, more than half my life, and my writing has both reflected and shaped my experience.

First there was Hello From Nowhere, a story about a little girl who thinks that living in the middle of nowhere is better than living anywhere else in the world. Inspired by my year spent managing a roadhouse in the Nullarbor this story is really about seeing the best in people and places, making the most of your circumstances.

We took our son, Jack, back to NZ in 2013 for a year and two stories about my Kiwi childhood followed. They were stories about place, certainly, but also about gratitude and the ties that bind.

Something Wonderful happened on my return. It’s the story of Sam, a little boy who grew up in rural Western Australia and went on to become a famous physicist. This was the book where I returned to Dad the educator. I love physics and cosmology and when I visit schools it’s all about discovering your passion and following your dream. It’s no co-incidence that the story is set in good old WA again though.

No co-incidence that my next project began in the East Kimberley either. After visiting Kalumburu, Kununurra and Wyndham I felt compelled to use my connections and experience to help get a book published featuring the lives and experiences of contemporary Aboriginal kids, particularly those living in remote communities. Thus began a life changing journey. Along the way I discovered country. And belonging.

Boori Pryor once told me that to make a place feel like home you have to get to know the land and its people. Australia’s first people have given me that gift.

With awesome Noongar musician, performer, entrepreneur, reconciliation hero and film maker, Phil Walley Stack, I have written a book called Rocky and Louie. Illustrated by the remarkable Dub Leffler (who drew on his own visit to the same communities for inspiration) this book features two brothers whom we think the whole of Australia will fall in love with.

It all feels like a coming together now. My work is featured in the new WA Museum and I can’t express how honoured I am. More than anything it makes me feel West Australian.
​
Nitja wiern boodjar barruniny nguny. This spirit country holds me. 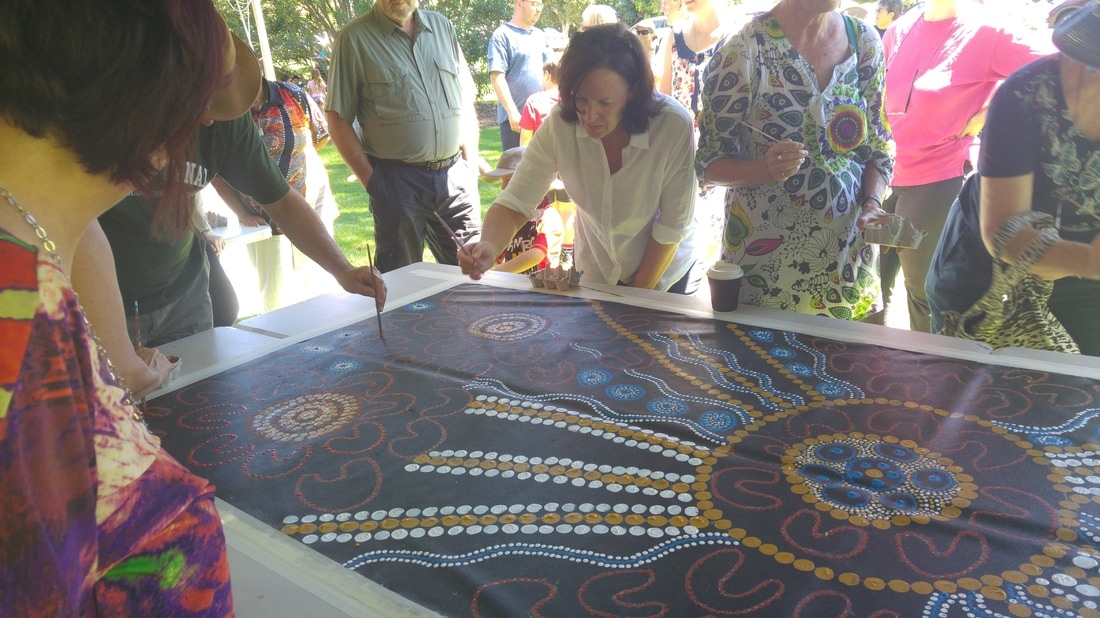